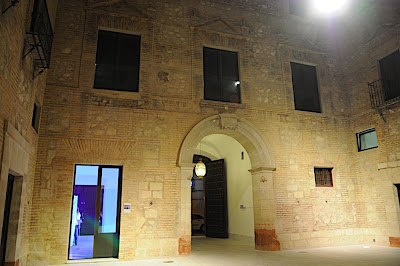 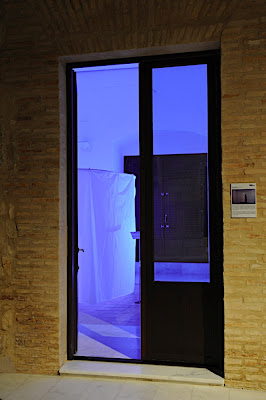 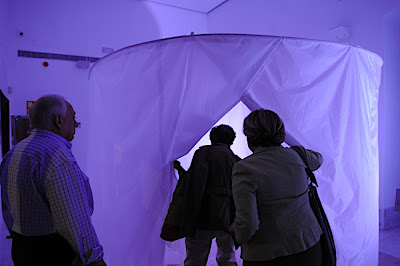 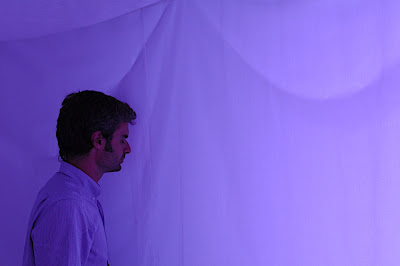 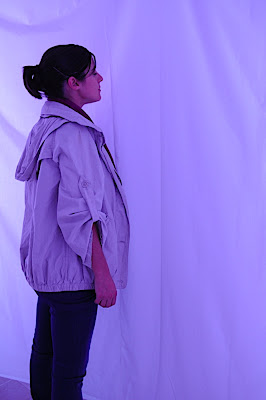 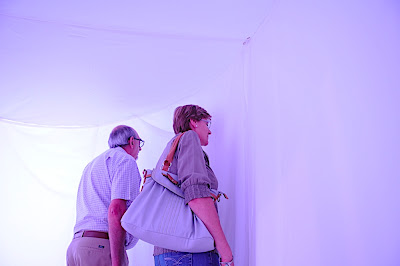 It was nicely opened on the 21st of October, 2011. I arrived in the middle of opening. I've heard that the person who made an opening speech, a respected artist who resides locally, was very interested in this work, because he himself has made paintings with orange smell. All the other works were nice and I knew almost all the artists too. The party became a nice reunion :-)

20th October – 12th November 2011. Lucena-Córdoba
After ten years of activity Sensxperiment International Creation Meeting will be organized in a triennial basis, so most activities of the current eleventh edition will take place in October and November 2011, mainly in Lucena and Cordoba, Spain.
The topic chosen for this edition is ‘Sensory Immersion’.
We do not have to talk only about the history of arts and entertainment, this phenomenon has always been integrated in the quotidian experience and it appears also in most popular rituals, from the ancient indigenous cultures to all kinds of Western celebrations, in a rave or a metal performance.
Today there are a lot of artistic and entertainment pieces that promote themselves using extensively the term ‘immersion’. In many cases this term underlines their multisensoriality, hyper-reality or a somewhat intimate and subjective character, in other occasions it is maybe just a way to stress their magnificent technologies.
Anyway, let´s talk about what it is interesting for us and what we will deal with in this project. Our aim is to examine this elusive concept departing from a series of artistic works based mostly in the use of audiovisual media and with a special emphasis in topics related to the exploration of the surrounding, intimate and physical qualities of sound. The aim is to show recent works, but also relevant pieces from the past, all of them considered interesting mostly because (but not exclusively) of their value as perceptive experiences. We also would like to contextualize these kinds of work, examining them from a critical point of view. Several interweaved lines of investigation will be drawn, dealing with topics such as expanded and live cinema, the relationships between sound and space, the soundwalk, deep listening or the soundscape. In short, we are more interested in perception and the sensory than in the spectacular or the strictly technological issues behind many works catalogued as immersive.
The basic structure of this project ia a dynamic investigation process started in 2009 led by some of the editors of mediateletipos.net and it take form in a series of regular online publications, as an accompaniment for the physical events that will take place in this year (and some that taken place in the last year 2010). All the posts related to this project are published within the usual flow of the site, but they are grouped also in a special section.
Posted by Maki Ueda at 19:06 No comments:

Cosmetics that I was involved as a perfumer will be released soon, and in prior to that they'll be exhibited in Tokyo at the DESIGNTIDE exhibition.
DESIGNTIDE
2011.10.29 - 2011.11.03
@TOKYO MIDTOWN HALL
https://designtide.jp/tide2011/exhibition-tide2011/?page=3
inframince.inc | t i l d e _
Their project "skin and environment / touch: design from feeling" proposes the world be perceived through touching. The project started with the thought that new ways of thinking and productive lifestyle can be acquired by spending everyday life with different perspectives. Directed by PANTALOON, artist Maki Ueda blended new perfume for the skincare product line "t i l d e _". They give people the fragments of thoughts perceived through "touching".
inframince.inc
http://inframince.jp
With the key concept “skin as the contact point with one’s surrounding environment”, inframince.inc proposes skin care products that make people more confident in everyday life. “Inframince” is a term coined by Marcel Duchamps.
perfume _ tilde_

Maki Ueda http://www.ueda.nl/
An olfactory artist Maki Ueda developed for the fragrance of [tilde_] with the image of "skin tone".  It is not too sweet, somewhat dear, and transparent.
In the old Japanese language, there was no clear division in expressions for the color and the smell.  For example the word "niou (fragrant)" meant not only smelling nice, but also meant that the color of "beni" looks vibrant. (The "beni" color looks like mixture of red, pink and orange). There is a perfect example in the oldest poem book "Manyoshu" edited more than 1000 years ago.  The poem is about the beauty of a woman who is standing under a peach tree.  The pink color of the blossoms is reflected on the chin of the woman.  He says that the skin color of her chin is "niou (fragrant)".