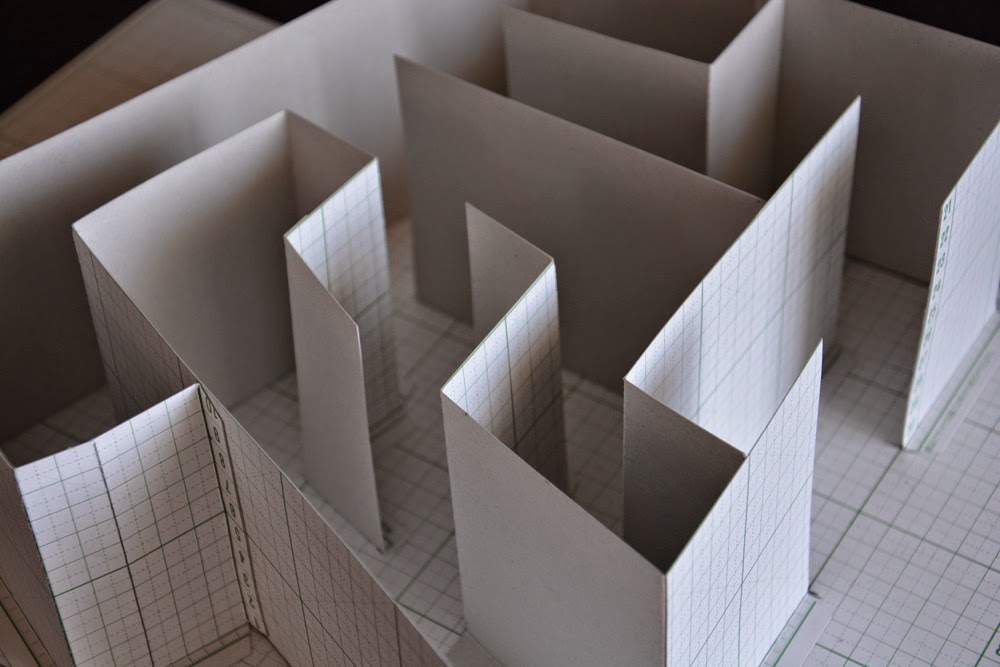 The very new work!  Premier at the Museum Rot, Germany, in March 2015.

It's a small, yet life-size maze designed for playful olfactory exploration that challenges your sense of smell.  If you follow the right scent, you will manage to get out of the space.  Otherwise you will be stuck in the maze.
In recent years my key words have been "movement" and "olfactory experience". I've been researching omni-directional olfactory experiences within a certain space. The sensations created by actively walking around and finding smells are very different from just passively receiving smells.

I’ve wanted to make such life-size "olfactory labyrinth" for years. But I first experimented at low cost, resulting in this first prototype in 2013: an installation with bottles hanging from the ceiling in a grid. Each bottle contains fragrant oil. The candle rope by which it hangs from the ceiling gradually absorbs the oil and spreads the scent around the space.

The main focus is the olfactory experience rather than the scent itself. I think that smell is, in itself, neutral. It's the audience who attribute meanings such as "I dislike this smell" or "This is the smell I knew from my grandma's house" after processing olfactory information in their brains. Such meanings to smells are given from personal experiences and histories. This is why I chose not to give meanings to smells in this project.

I rather want to be open to surprising olfactory experiences that we normally wouldn’t encounter in daily life. Omni-directional olfactory experience has been forgotten in our modern life, so reviving it is especially interesting. You can become convinced that human beings, much like dogs, have the ability to sniff around and navigate themselves using their sense of smell.

I try to exclude visual and audible aspects in my works as much as possible. I let the work explain itself rather than doing so in words. Instead smells and space communicate with your physical sensations, allowing you to project images and play sounds in the mind. I believe that smell possesses such power.