Smells for the Paris Agreement, premier at Mazda 100 years anniversary
.
[Artist Statement]
.
I am deeply grateful to Mazda and the agent for inviting me here and commissioning my new work.
.
I have been working in the Netherlands as an olfactory artist since 2005. I am now considered to be one of the most prominent artists in this particular field of contemporary art.
.
This work is an epidemic in my long career.  This is because it is the first time I have tackled the social problem as global warming.
.
Climate change is a serious global problem. Why is it so hot in Paris in the middle of September?
.
What can we do about it with smells?  For example, can we change the way we feel hot and cold with olfaction? This  question was my starting point.
.
The title of the work is: Smells for the Paris Agreement.
.
I am diffusing a cooling fragrance and a warming fragrance, made with scientific data, in each of two spaces that are controlled to have the same temperature.
.
You are all witnesses and test subjects for this little experiment.
.
I asked a young scientist Jas Brooks from Chicago University for advice which molecules to use. I also read the paper regarding trigeminal nerves and transient receptor potential(TRP), the receptors related to temperature.
.
What was fascinating to me was that, like perfumery, it's important to have a balance between the components.  Some components can be both cooling and warming. Methyl Salicylate is a good example.  This is a common scent used in a cold and a warm patch.  When combined with black pepper, it works for warmth, and when combined with eucalyptol or menthol, it works for coolness.
.
The following components were used in the final composition.  They are mostly Synesthetic:
.
{The Cooling Fragrance}
menthol
eucalyptol
thymol
citral
cinnamaldehyde
linalool
methyl salicylate

{The Warming Fragrance}
Black pepper
Camphor
Eugenol
Red Chili Extract (self extracted)
Methyl Salicylate
.
Interestingly, linalool, eugenol and cinnamaldehyde, which I used for a cooling fragrance, are considered “warm scents” in perfumery.  This is where science and art differ.  In this work, I faithfully followed the science.
.
It's also interesting to note that Menthol, the heart of a cooling fragrance, only works at temperatures below 25 degrees Celsius.  Today, it's hard to get below 25, so it's possible that the cooling room isn't working properly.  I wasn't expecting it to get this hot... climate change.
.
In my own experiment I found that my throat was dry in the warm room.  Yesterday's guest described its dry feel as "cork-like".
.
My lungs were cold in the cold room, and I also felt cold where I sweated.
.
Smells are absorbed by the body through mucous membranes and sweat glands, even if we don't feel they are smells.  Enjoy the intersection of the senses of smell and touch. 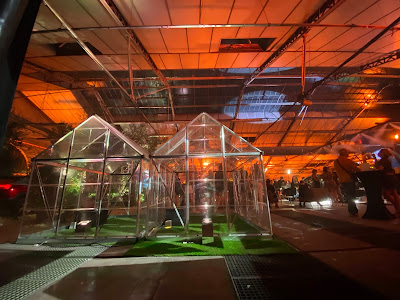 Labels: [Smells for the Paris Agreement]